Tools for Thought: The History and Future of Mind-expanding Technology (1985) MIT Press edition 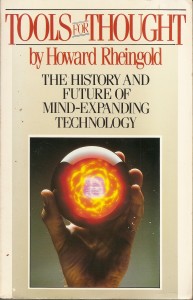 South of San Francisco and north of Silicon Valley, near the place where the pines on the horizon give way to the live oaks and radiotelescopes, an unlikely subculture has been creating a new medium for human thought. When mass-production models of present prototypes reach our homes, offices, and schools, our lives are going to change dramatically. The first of these mind-amplifying machines will be descendants of the devices now known as personal computers, but they will resemble today’s information processing technology no more than a television resembles a fifteenth-century printing press. They aren’t available yet, but they will be here soon. Before today’s first-graders graduate from high school, hundreds of millions of people around the world will join together to create new kinds of human communities, making use of a tool that a small number of thinkers and tinkerers dreamed into being over the past century. Nobody knows whether this will turn out to be the best or the worst thing the human race has done for itself, because the outcome of this empowerment will depend in large part on how we react to it and what we choose to do with it. The human mind is not going to be replaced by a machine, at least not in the foreseeable future, but there is little doubt that the worldwide availability of fantasy amplifiers, intellectual toolkits, and interactive electronic communities will change the way people think, learn, and communicate.

The Virtual Community: Homesteading on the Electronic Frontier (1993) MIT Press free electronic edition (you can also order the paperback)

When I started writing about online sociality, I didn’t realize that universities would have programs for cyberculture studies decades later. My 1987 article, “Virtual Communities,” put that phrase into the public vocabulary, I’ve been told. I wanted to write a book about what I was already observing in 1987, but my agent and editors told me that nobody but electrical engineers would read a book about using computer networks to socialize. It took me five more years to get a book contract. I’m happy to see the dawn of the day when self-publishing is becoming easy and cost-effective for authors, multiple platforms have emerged for selling books directly to readers, and the stigma of “self-published=loser” became obsolete. I’m tired of waiting five to ten years for traditional publishers to look where I’m pointing instead of biting my finger.

Smart Mobs: The Next Social Revolution (2002) (about the book — summaries, reviews) 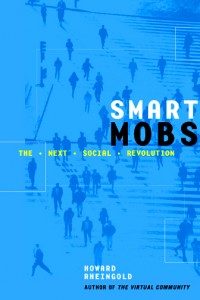 Ten years before smartphones, Tahrir Square ,and Occupy Wall Street, I predicted that the merger of mobile phones, personal computers, and the Internet were lowering barriers to collective action and enabling new economic, social, political behaviors. I also forecast location-based social media, messages in places, and the use of the mobile phone as a remote control for the physical world.

Editing the Millennium Whole Earth Catalog was a memorable experience, attempting to orchestrate a network of editors, all fighting for (expensive) page space. The sustainable agriculture people didn’t understand why the Internet subcommunity got so much space, the community editor wanted to take pages from the ethnobotany section. This was in the early days of desktop publishing — we delivered a hard disk and PageMaker files to HarperSanFrancisco.

Net Smart: How to Thrive Online 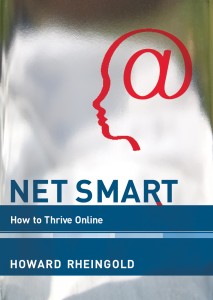 The future of digital culture—yours, mine, and ours—depends on how well we learn to use the media that have infiltrated, amplified, distracted, enriched, and complicated our lives. I’ve been asking myself and others how to use social media intelligently, humanely, and above all mindfully. This book is about what I’ve learned.

In 2012 I wrote an e-book for TED. I wanted to condense and connect a few things I knew about the dimensions of intellect augmentation that weren’t part of engineering curriculum, from Elinor Ostrom’s design principles for commons to Doug Engelbart’s fundamental text, Augmenting Human Intellect, including the co-evolution of thought and media, from the co-emergence of thought and speech through the augmentations of writing, alphabets, printing presses. Here it is as a PDF.