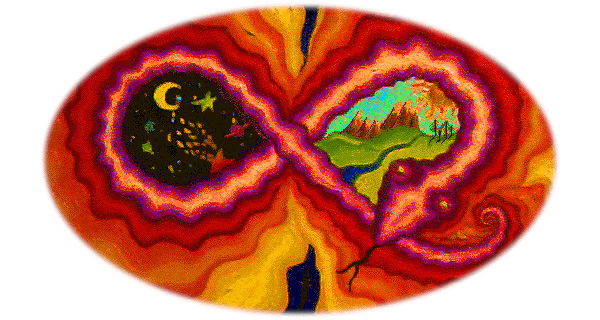 A number of themes have emerged in my work over the years. I don’t put a lot of intellectual effort into thinking them up. I’m attracted to some symbols and paint them. Then I look into their meaning. This painting contains two of my themes — gateways to other universes, and Ouroboros, the snake that swallows its tail. According to Carl Jung, Ouroboros is a symbol of alchemy as self-transformation:

“The alchemists, who in their own way know more about the nature of the individuation process than we moderns do, expressed this paradox through the symbol of the ouroboros, the snake that eats its own tail. In the age old image of the ouroboros lies the thought of devouring oneself and turning oneself into a circulatory process, for it was clear to the most astute alchemists that the prima materia   of the art was man himself. The ouroboros is a dramatic symbol for the integration and assimilation of the opposite, i.e. of the shadow self. This feed back process is at the same time a symbol of immortality, since it is said of the ouroboros that he slays himself and brings himself t life again, fertilizes himself and gives birth to himself. This is much like the cycle of the Phoenix, the feminine archetype. Ouroboros symbolizes The One, who proceeds from the clash of opposites, and therefore constitutes the secret of the
prima materia which unquestionably stems from man’s unconsciousness.”